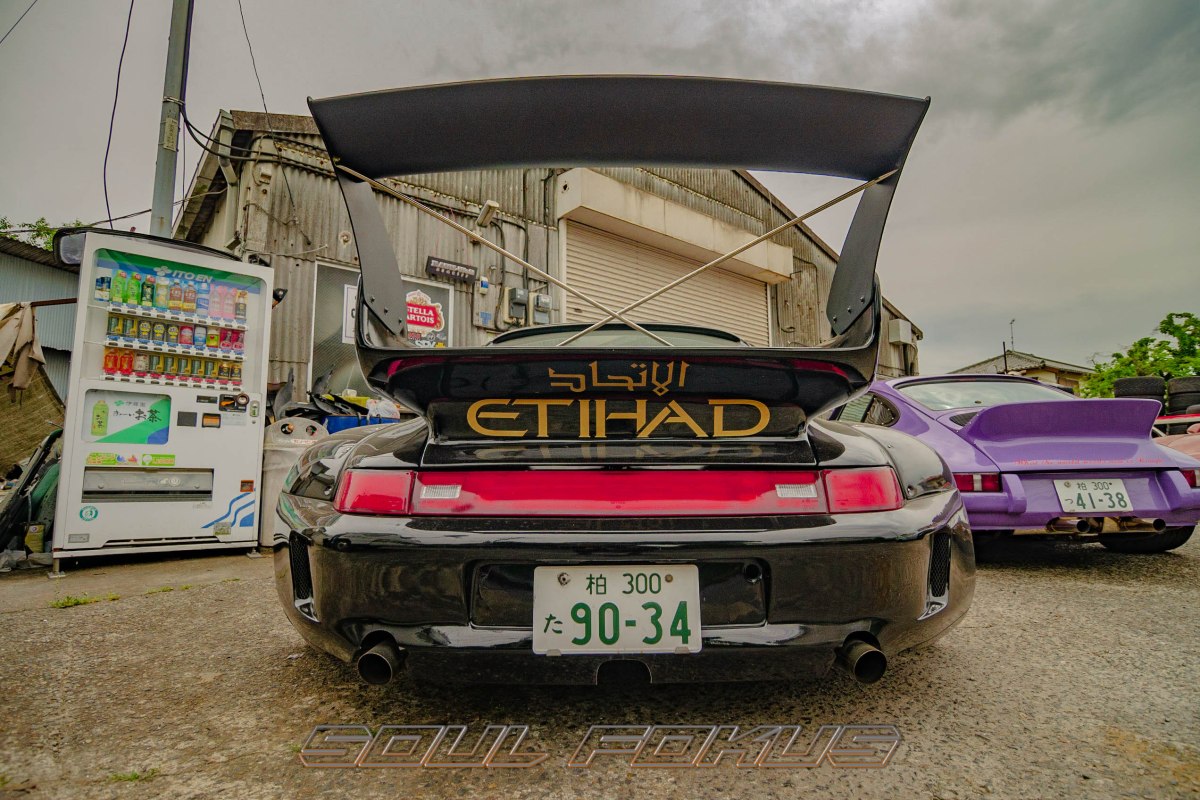 Well, here we go again. Usually I grow tiresome of repetitiveness in life in general, but visiting Japan for the third time felt almost like the initial venture. I cannot put exactly into words how landing in the country makes me feel, but something along the lines of “exciting freedom”. I kind of knew what to expect in terms of the unique culture and lifestyle that Japan is rich in, but there is always something you see or experience that makes you realize how amazing the country is. Through these following posts, I will try and convey my feelings as truthfully as I know how, because my end goal with all of this is to just express myself, and present what I find that makes the Japanese automotive scene and culture in general so interesting.

Me and the old man went over this time round, so I made sure I planned the two weeks out so that it wasn’t all car-related activities. We landed on my birthday, 23 years old, man, its a weird age. Like the bridge between post-teenager and young adult.

Anyway, I am gonna let the photos tell the story for the most part, and what’s better than to kick this series off with the undoubtedly freshest and ballsiest classic-Porsche craftsman, Nakai-san.

We stayed at a family-friend’s home in Fujigaya, Kashiwa, Chiba Pref., which is a small rural area about an hour’s drive from Tokyo. Little did I know that the RWB HQ is based literally down the road from where we stayed for the majority of our time in Japan. Knowing this, I headed straight there on day #2, armed with both my D500 and D5100 Nikons.

We went around the last corner as per Google Maps and boom, Porsche Carrera 993s & 964s wedged onto the forecourt as efficient as possible utilizing every square inch of space. Luckily theres some land beside the medium-sized industrial unit, so I dumped the car next to a row of Carreras.

Hesitant to just barge in, especially since I didn’t even give Nakai a headsup, I tried for the front door but it was locked, so I took my time and gawped at how crazy his machines are.

Next thing, I saw a blue kei car with a dropped ride-height and multi-spoke wheels roll by and I locked eyes with the driver*, who just happened to be the man himself (*maybe pissy since I think I parked in his space). He spun his car around and parked up, whilst I was nearly shitting a brick, because if it were anyone else he might have told me to scarper. But he just greeted us and kindly invited us in.

I didn’t stay at RWB for long as it almost felt like I was in his house. The place, which acts as Nakai-san’s workshop/bodyshop/hotel/bar, is like a mini-museum with so much of the history of Rauh-Welt Begriff kept on display. To see that it all started from messing about with AE86 Corollas, this global icon has turned the heads of Japanese-car enthusiasts (including mine) and made old Porsches seem cooler than I had once believed. With his next project being the 996 chassis, I wonder how far he will go with the 911 lineage in the years to come.

Leaving Nakai-san’s natural habitat, we headed back to the house, just because I didn’t have much planned whilst being situated in Chiba.

But, on the way back, I came across a familiar signpost: SEED. I remember stopping by this place the first time I visited. I like how common high-performance tuning garages are, but in a very Japanese sort of way, most of them look like your average, run-of-the-mill service centres to the untrained eye. Though, once you spot the HKS or Greddy posters/banners, or the four-wheeled eyecandy for that matter, its reason alone to take a closer look.

SEED Race Car Engineering, is a do-it-all garage, catering towards highly-modified domestic models ranging from MX5 Roadsters to GTRs. The place was jam packed, but unfortunately most of the photos I took had either bad light or a lot of ISO noise, so I won’t embarrass myself by uploading them.

A short entry, but this is just a taste of whats to come once I get my ass into gear and sift through the GiGs of material I have stacked on my desktop.

Scroll for the bonus gallery… 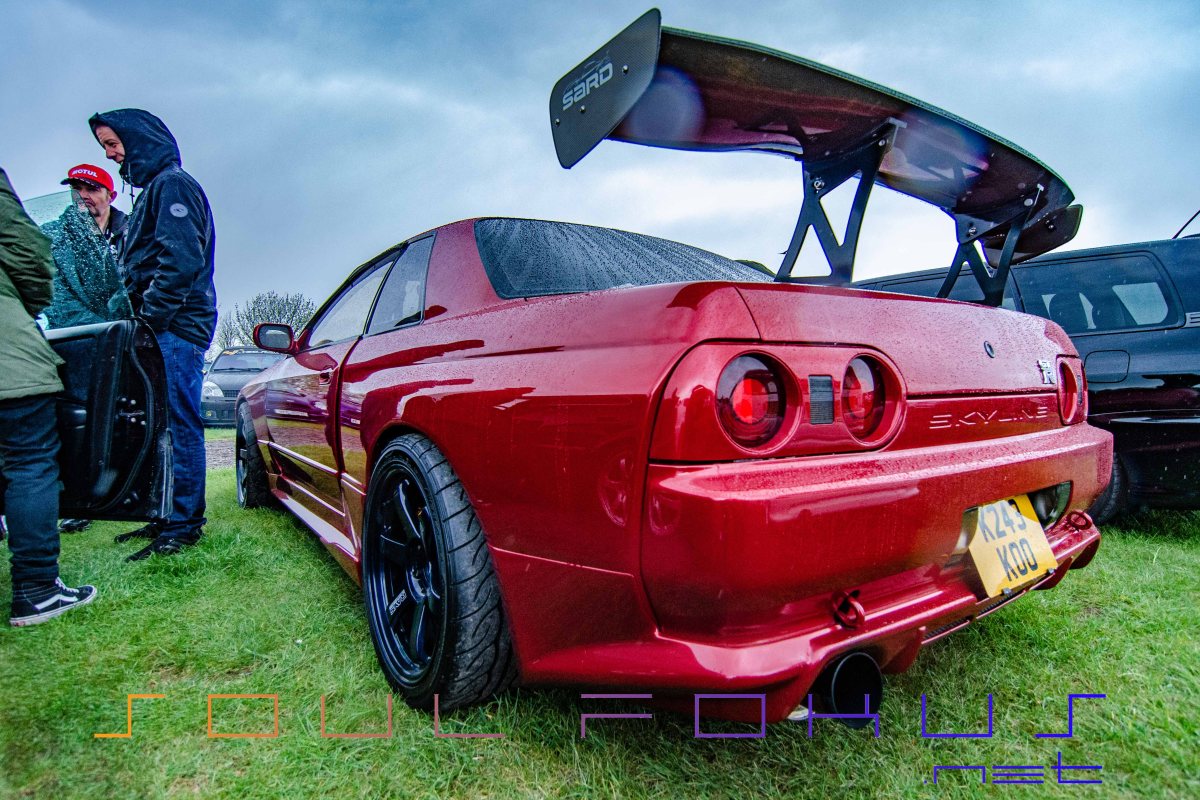 The idea of a dual-purpose automotive event makes complete sense to me. On-track action and off-track works-of-art (for the most part) go hand in hand, and where better to put on this kind of event than Cadwell Park during UK Time Attack’s season opener. Seeing cars in motion induces a different kind of feeling that is difficult to describe. When you encounter a car parked up, a machine of your dreams for example, if you’re like me you whip the phone out for some quick pics before someone spots you and looks at you awkwardly. Then, there are some moments when you are out and about, either on foot or driving, and you hear or catch a glimpse of ‘x’ car passing you by going the opposite direction. You just gawp, or if its moving slow enough you try video it and share it on social media because the internet is the world nowadays. I usually do the former if I see something special, ‘cos the cars I am into are fast, and that’s why I HAD to make it out to this year’s Modified Live when its a 2-for-1 deal as good as this.

The small-scale show is a mix-up, with car clubs of all types putting their pride and joy on display. This post is more of a gallery, so skim through and thanks for viewing.

Nissan’s S13 chassis was out in full force with a few here and there which was pleasant, since the S14 was more prevalent since they sold better to the UK market.

Who do you think wins this “Silvia face-off”? Both are well put together examples, but I am going to have to side with the deep-grey model sporting the polished and purple SSR Professor SP1 rollers. Could be the Japanese number plate that did it for me aswell if I am honest.

This Red Pearl Metallic R32 GTR didn’t have trouble standing out from the crowd, sometimes I need to do a double-take when I find one at an event especially if its near enough factory-spec. These cars are the ultimate sleeper coupe, and I remain loyal to this iteration of Nissan’s AWD supercar destroyer lineup.

Its rare you find one in this gorgeous colour, and then the owner went a step further and enhanced the looks with a set of Mag Blue Volk Racing TE37s.

Everyone’s favourite made an appearance: the Gran Turismo/Fast and Furious hero. Wherever you witnessed this machine for the first time, the Bayside Blue R34 GTR will be the icon for centuries. Not many words are needed for this one wearing the holy grail of multi-spoke split-rim wheels.

The rest of the Nissan selection. That dreamy Sileighty was amazing. Only in Japan during the 1990’s would Nissan be bonkers enough to merge two cars together, and damn me if you think I’m wrong but the result is perfection. This automotive synergy wasn’t even the manufacturer’s idea; Kid’s Heart (a tuning company who specialise in slidey cars e.g. Silvias, Chasers etc) put this style together since a lot of street runners found it cheaper to swap the pop-up headlight front end for the fixed headlight face found on PS13 models. The cars went on sale in official Nissan dealerships, with approximately 400 sold in the year 1998. The industry will probably never be the same…

Evos and Imprezas were plentiful at the show, here I some of the highlights I managed to catch whilst zipping about the field in the rain.

Mazda mania. Not as much as I would have liked but quality comes before quantity, and these few were pretty nice. The Rocket Bunny FD3S RX7 was well executed, sporting those Work L1 three-piece wheels, the first set I have ever seen on this chassis in person.

Hope you liked what you saw, I try to get as much detailed shots as I can, but its difficult to stay fokused on one car long enough to soak it in, especially when there are enticing builds all over the show. Last summer on a visit to Cadwell Park, I joined Luke who, at the time, owned a homebuilt kit car. Now, I have never been keen on kit cars, especially the Lotus 7/Caterham “style” variety. It must be something to do with my awkward feeling towards replicated designs. This topic is something I could write on and on about, so I am going to stay on course for this one.

This particular machine Luke built in his garage is an MNR Vortx, space-frame tube chassis, fibreglass lightweight body, driven by a 1.8 BPZE engine from a Mazda MX-5 NB/MK2. The basic concept is excellent though, as I experienced in the passenger seat that day at Cadwell Park, which nestles in Lincolnshire, UK.

This blog post won’t revolve around his car however, as I did not get the best of shots in retrospect, but other cars were out there blasting around the 2.18 mile course which is actually designed for motorcycle racing; picture narrow track width and grassy runoff areas.

I hope to return to Cadwell Park in the near future. The entire place has a cool vibe about it. That wraps up this “throwback” post. Getting out there and shooting more track events is one of my aims this year, so, until next time… 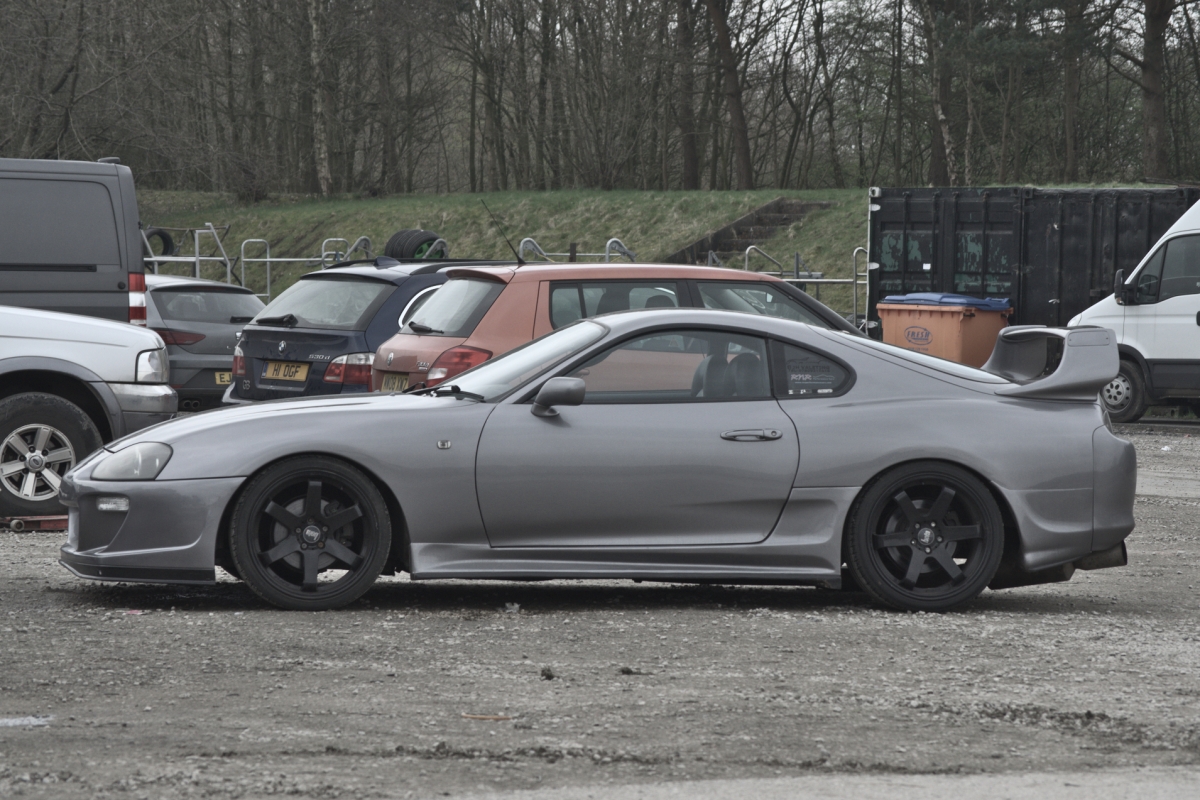 Never really grew up with much, if any at all, drift culture involved in my car life. My initial exposure to the artform was probably as cliche as it gets: Fast and Furious Tokyo Drift. My brother introduced me to Best Motoring as early as I can remember, Japanese guys sending cars sideways, in both factory and tuned forms. It’s almost as if it was in their DNA, without sounding cheesy.

Nowadays, especially because of the Internet, the passion for drifting, as both a sport and an automotive ‘scene’, has spread to all pockets around the world. Even managing to worm its way into Wigan, UK. This was my first time attending a dedicated drift competition event, which appeared to have more focus on the drivers and cars, instead of acting as an all-in-one festival type of event as can be seen with the more commercially popular shows. Less circus, more circuit… 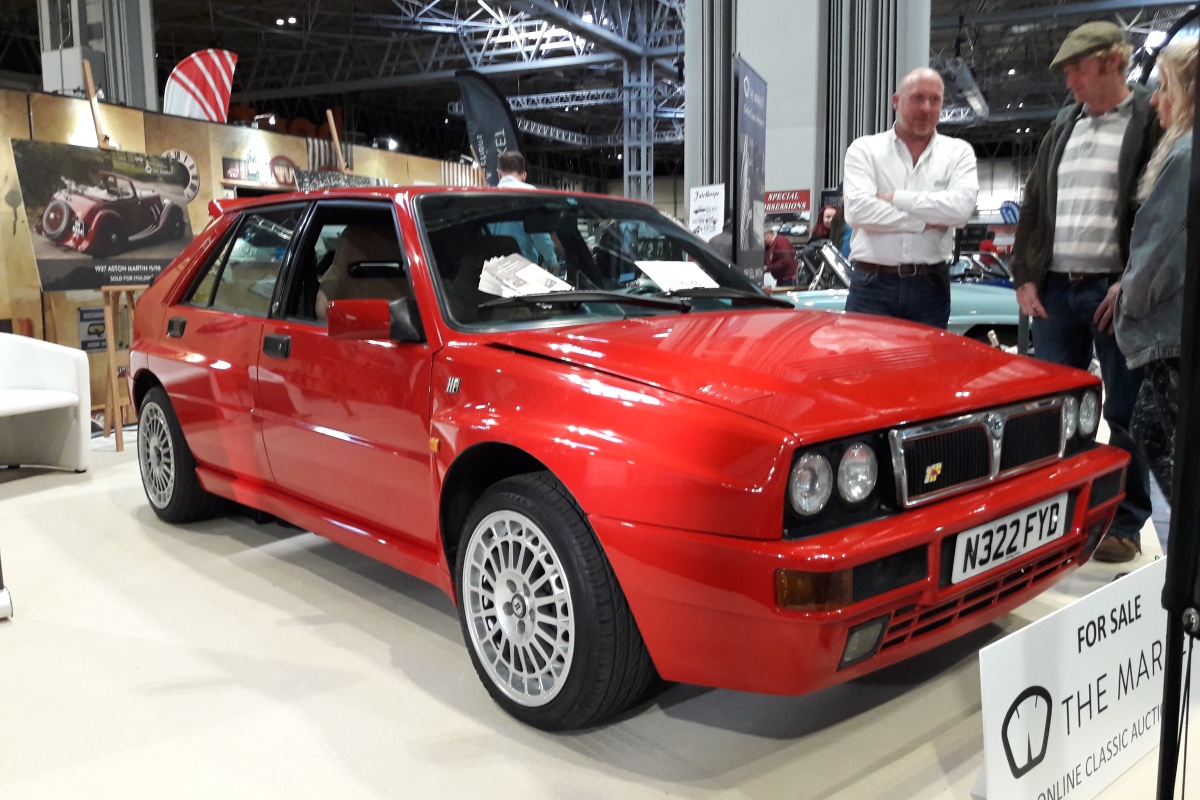 Me and my cousin made it out to the NEC in Birmingham to attend the Classic Motor Show in one of the biggest venues in the UK. This was also exposure for me to cars I would not usually be interested in so I thought why not venture into the unknown. I think it was my narrow mindset that led me to presume all I would see is a bunch of Minis, Jaguars, and Fords. But, the photos you are about to view completely dissolved that idea, and I was pleasantly surprised!